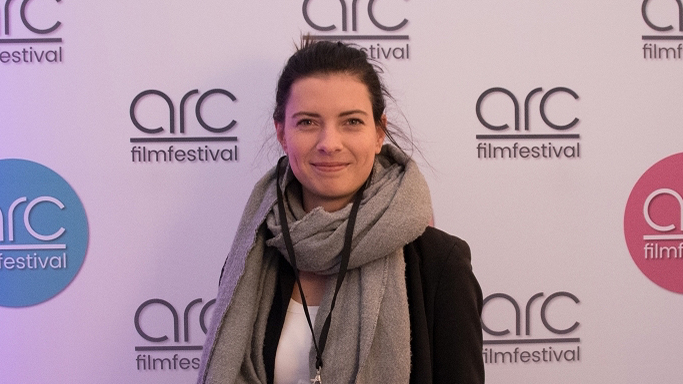 Caroline Schwarz impressed the programmers team with a unique way to tell a subtle story. Without any distraction she tells a fairytale in black and white. Alexander Horstmann asked some questions about the film that she presented at the Arc Film Festival 2017: Doors of Perception. 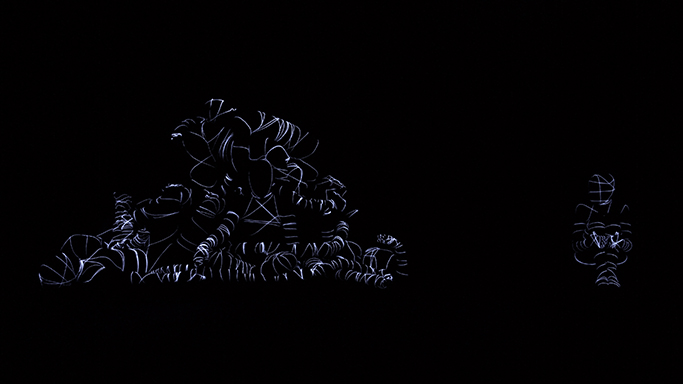 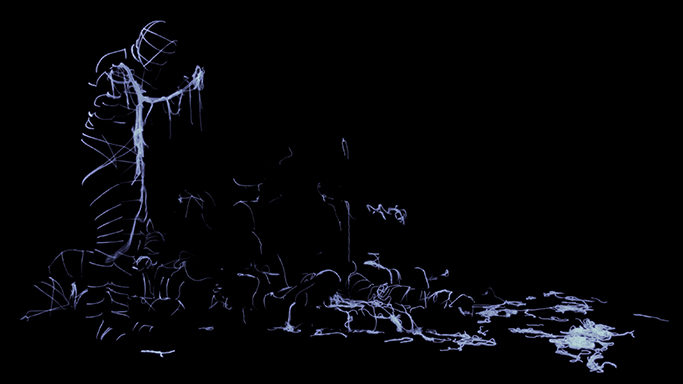 Alex: We loved loved loved Doors of Perception and the programmers were very excited about your submission. I can imagine this process of concepting this piece to be very interesting. Can you tell us a little about how your idea got into shape?

Caroline: I remember thinking it would be cool to do something with black light. I loved the possibility of having no space. In every other movie you always have space and you can’t avoid it because you need light and as soon as you have light, you can see everything. So the idea of having no space was very appealing to me and it was also the biggest inspiration. It came from the visual. First, I structured the film with a storyboard and later on I tried to capture, whatever I was doing with the pictures in some sort of a script. So the story came later. I mostly worked on the story alone, but really early in the process, I worked together with Anne- Simone [costumes and set design]. It was very helpful to be able to talk to her. I would tell her what my idea was, what I thought was a good direction and then she would have a better idea of how to do the same thing, but in a different way. She’s great. But it wasn’t easy. I don’t know anyone who made a film with black light. That’s why we had two test shoots. We had to try everything out. And then the things about which we were sure would look great, actually looked terrible and things we weren’t so sure about, would work surprisingly well.

Alex: It’s a beautiful set up. But how did you intrigue the actors to be part in a film where they can’t even show their faces. Since it was a student production you probably couldn’t presude them with lots of money.

Caroline: I had worked with Meike [the leading actress] before. I had also worked with Anne-Simone onsomething small before and I knew everyone, who was on set, a bit at least. I love to work with people I know. It’s more fun, but I also think it’s much more productive because you already know how the other person works and what kind of process they have and you can jump right into it and focus on what you want to do. I financed the film myself and I was able to pay really little money to Meike for example. But of course it was an issue, that you would never recognize her work for that film through her face. I was lucky, that we knew each other and that she did it as a favour to me and my work. I think all the people who work with me are intrigued by my work to some extend and on the other hand, I am friend with most of them as well.

Alex: We think it’s brave to tell as story that way and we were impressed about the depth of storytelling within a concept with such simplicity. What did you lear in the process? And which skills did you acquire out of it?

Caroline: My interest goes towards experimental filmmaking. I enjoy experiments in the visual style, but on the other hand I still want to have at least some kind of a story, so I’m still trying to figure out how to combine these two. And the film was a very good process regarding that. I am very happy that people like it so much and that it got such great feedback at film-festivals. It made me a whole lot more confident in my stylistic approach. So many people said to my storyboard back then, that this film is not going to be emotional, that you never see facial expressions and that it will be dull and robotic and all sorts of things. With the finished film, I never ever heard that again. And since then, when people again, tell me my latest concepts sound „unemotional“ - I always lean back and say: „But it's not going to be unemotional. It's not. Believe me.“

Apart from that, I am now somewhat of an expert regarding Blacklight-Filmmaking. It was very specific, very, very challenging sometimes but very interesting. There was this thing with our main actress’ costume for example. We wanted her to be wrapped in the white strings but we also needed her to be in a morph suit, completely black from head to toe and the challenge was that she had to be in this costume for the whole day and also go to the bathroom or have a break sometime. Of course you can zip in and out of the suit but wrapping the strings around on top every time seemed too time-consuming, so we tried to build a construction on the morph suit that would allow her to zip herself out of this thing with the strings attached. My costume designer first tried to stitch the strings on to the suit, but that was a lost cause. Then she tried to glue the strings and the poor actress had to sit in costume and wait for two hours until it dried. So we thought we would do it this way, but then, one day before shooting the costume designer and I, we were sitting there, looking at it and thinking: “it’s so bad, it looks really bad”, because the strings would loosen and move, she looked like she was wearing a cheap Halloween costume, a mummy made of toilet paper.. It was awful. We ran out of options and so one day before the shoot we decided that there was no other way, but to wrap it around her every time. It was even more complicated, because the costume designer had  to try to match the continuity and always wrap the string the same way. In the end, it worked ok and Meike was really brave, she was in this thing for a very long time.