We met Caroline Schwarz the year before. At the Directors’ Coffee held the second Arc day in the Lomo Buchbar we were discussing about directing a crew and actors. Caroline already knew that soon she’ll be working with with improv. Now, a year later she is presenting her fabulous short Employee of the Month. Alexander Horstmann was curious about the result of the process.
Fotografie: Sebastian Matthias 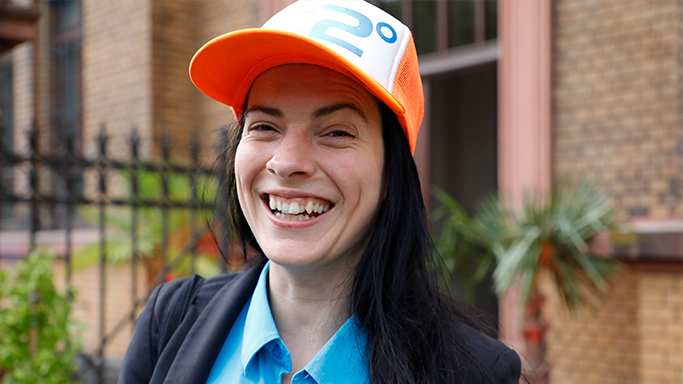 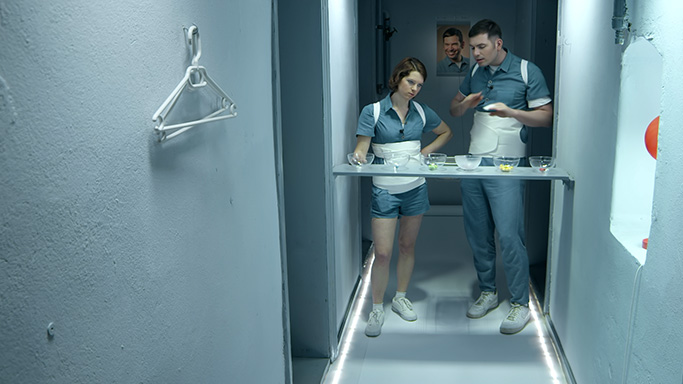 Alex: We remember when we talked about your initial idea to work with improvisation when you visited the Arc Film Festival in 2017. How did the engageement with the actors eventually work out?

Caroline: Basically the two lovely Actors (Anjorka Strechel and Arne Krause) are the Co-Authors of this film. When we started in my living-room, we had almost nothing. We had the setting of them sorting gum as an absurd task. And that was it. Everything else we developed together and I owe the brilliance to the two of them.

Alex: How did the idea of the film get to you?

Caroline: The Story of the film is, that I had to make an exercise in film school. The only specification was, that it needs to be improv. I was already working on first ideas regarding my feature „a deeper high“ back then, which tells the story of humanity replacing all food and nourishment with gum. So I thought I would just take this exercise as an opportunity to inspire myself for the writing-process and do something with gum. I invited two actor-friends and we improvised in my living-room. I had a blast, filmed everything and edited it to about 8 minutes, which I loved so much, that I said, we have to do that again... In a real set, with good audio and so on and so on. So we did.

Alex: What were the difficulties you encountered?

Caroline: For „Employee of the month“ we took all the elements we arranged in the living-room and reimprovised Which worked surprisingly well. A lot of people were like „You can\'t repeat the magic“ of the first improv and made me nervous about the attempt– but you can. Obviously we still changed and discovered things in the second version though. In general I don\'t like improv in film that much, because I like my work to be stylized and for it to be stylized I plan everything out to the extreme. When you improvise you never know exactly, when the greatness is going to hit . Takes run and run and then all of a sudden something is discovered and it\'s great, but you need to get rid of all the stuff leading up to it. And I despise Jump-Cuts that are only installed for that pourpose for example. That\'s why I thought this version was great, since we made it a „Mockumentary“, we justified the Style through that and had the interviews to break the scenes. And another beauty and difficulty of improv to me is that as a director, I am just as suprised and captured by the moments the two created as anyone else. It\'s not my script. I didn\'t write it – they invented stuff in front of my eyes and made me fall in love with that. I had to kill way more Darlings with this film because of that... Heartbreaking. Very heartbreaking.

Find the short synopsis to the film here:

Employee of the Month