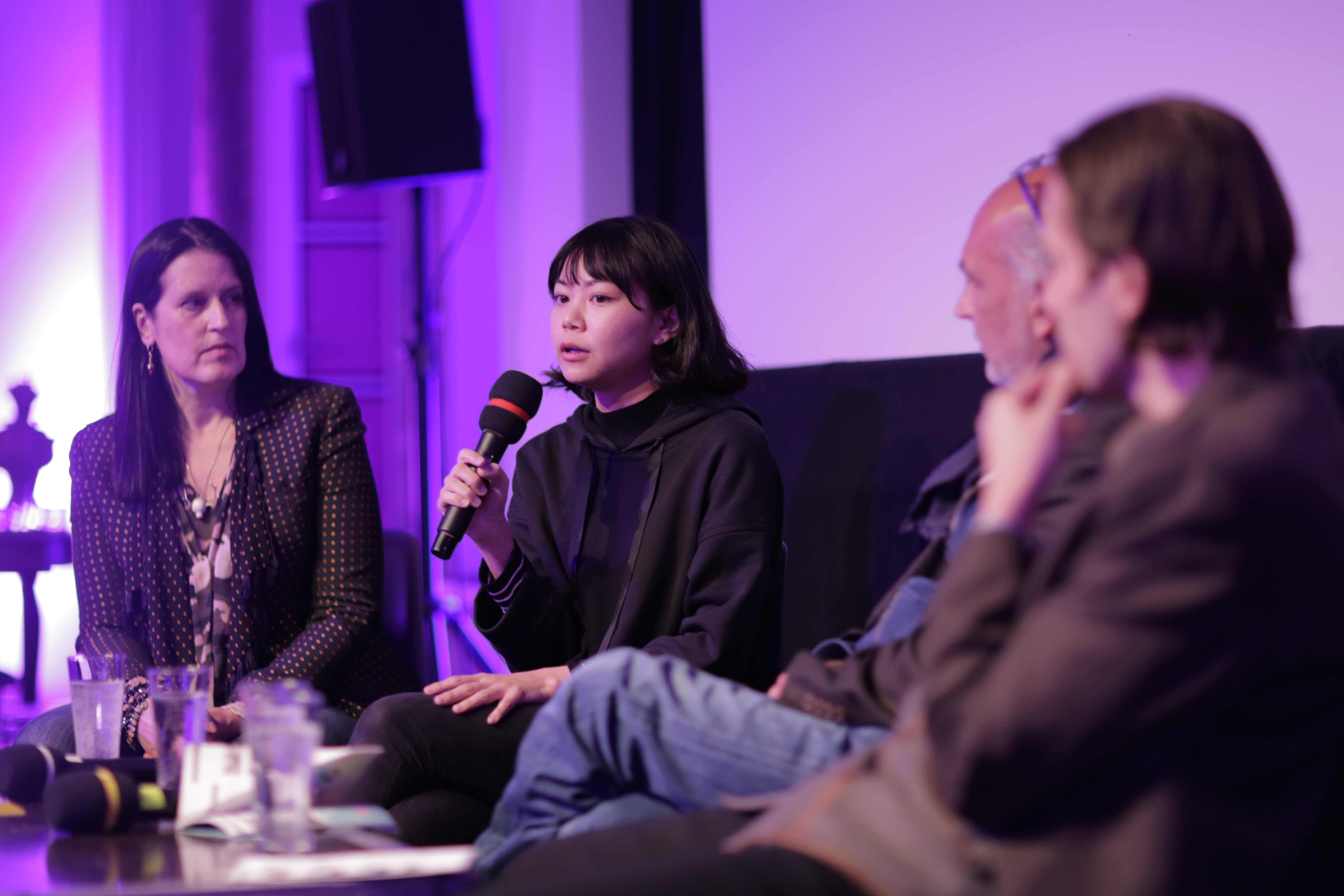 Storytellers find imaginative ways to share ideas. We want to encourage you. You, the audience and you, the filmmaker. The craft of film and the endless opportunities to use the medium is in the center of the 10th Scene Talk of the Arc Film Festival. We thank the filmmakers that have traveled from so far to partake in this innovative discussion. Host: Bahman Kormi (Cinematographer) | Photography: Thomas Banner

Karen Anstee (Director, Approval Needed): Karen graduated from London Film School in 2012 with an MA in screenwriting. Since then she has written, directed and produced several award-winning short films, with the most recent two being awarded the BFI Mark of Diversity Standards Best Practice.

Ming BadBadMeowMeow (Contemporary Artist, SuperMeowMeow Game of LOVE): The Taiwanese director and artist is challenging the boundaries of the medium. When does film and and game begin? This is not even relevant anymore, Ming is rethinking the traditional concept and opens up new ways of getting her message across. 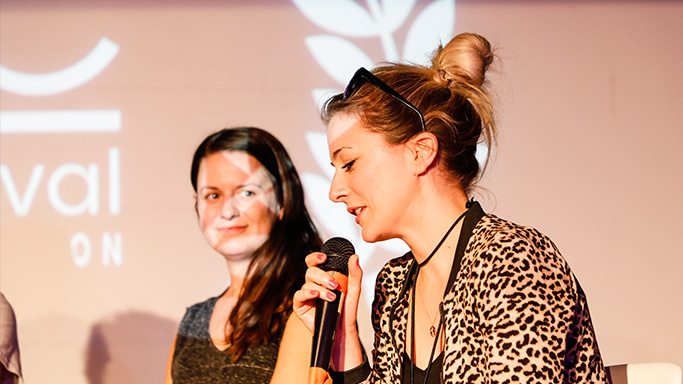 Role models in Germany and UK

A lot is going on. We can acknowledge progress when it comes to gender roles. But it\'s still way to early for loud optimism! This years partnership with the LGBT Festival Iris Prize from Cardiff brings the roles of genders of all kind in focus. The Scene Talk is followed by four shorts that face the world with humour far away from the stereo-types. Chair: Patrick Dwayne (actor, Bad Banks) | Photography: Sebastian Matthias & Veronika Bolotina

Phillip Aubel (producer of the QUEER Filmfest Weiterstadt): Philipp Aubel runs the Junge Filmszene in the national organisation for youth and film, curating an information network and running the youth film festival now in its 53rd edition.

Lisa Miller (producer & director, Landrauschen): In her long film Landrauschen, Lisa Miller develops character roles which until now are rarely to be seen in German cinema. 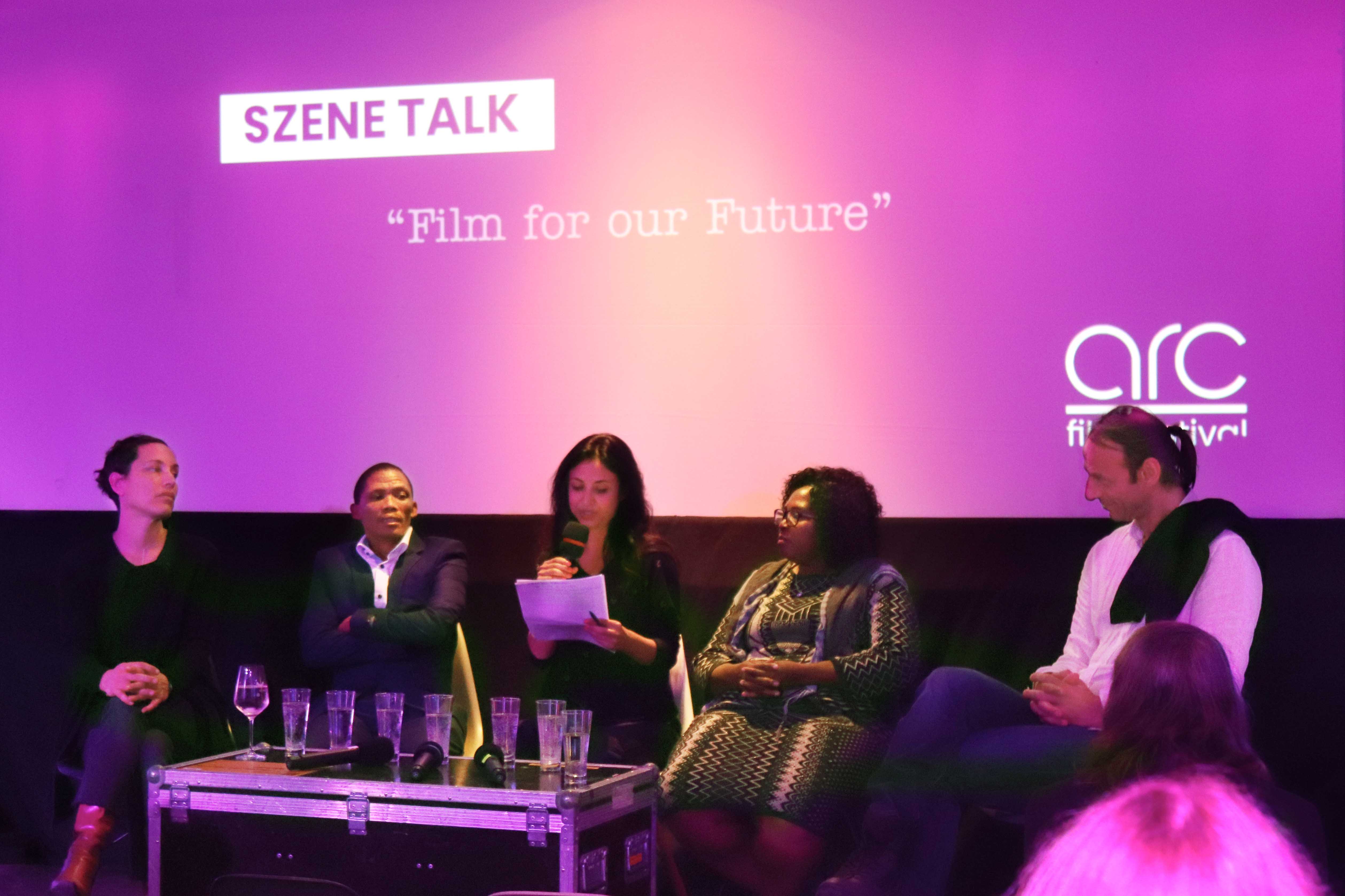 Film for our future

Film has the ability to change our minds and therefore it partakes in changing the world that we live in. The feature documentary Ghostland brings the older living culture on earth to the Rhine-Main area. Watching our society living the way we do from the perspective of the Ju’/hoansi we have a chance to see our routines from the angle of a civilisation of the past.

In December 2018 nine festival directors came together in Milan to talk about films and their creators that thrive to changing the world for the better. After this scene-Talk Linda Gasser will introduce the shared mission of the network that was founded under the United Nations. Host: Julia Monte (Actress) | Photography: Niklas Doka

Simon Stadler (Director, Ghostland): The director from Frankfurt was able to show his film all over this planet and opened up the view about the society we, the first world, live in from the perspective of the past.

Catania Lerner (Co-Director, Ghostland): Catania Lerner speaks the language of the Ju’/hoansi and she is ambitious that the outcome of the film will support their community. After finding audience all over the world the feature is critically acclaimed.

G'au Ghauz (Bushman, who saw Ghostland for the first time): G’au Ghauz is visiting Germany for the very first time. He can emphasise with the protagonists in the feature documentary Ghostland very well. 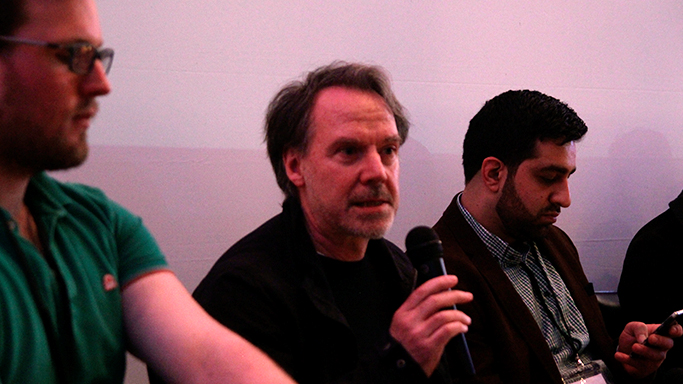 New concepts such as the writers room are becoming popular in the production of TV series. We talk to the television Grimme award-winner Stephan Falk and take a look over to Norway together with our four guests from Oslo. Chair: Vulkan Tüdov (Script writer and philosophy student at the Goethe University in Frankfurt) Interpreter: Marius Grein | Photo: Eva Schmidt & Sebastian Matthias

Thomas Gunnar Røtting (author, director, composer, The Rhapsody in Red): The director from Norway is presenting a musical at the Arc Film Festival.

Kjtil Onarhim Keen (camera, The Rhapsody in Red): Telling stories in pictures is the passion of the Norwegian cinematophraher. 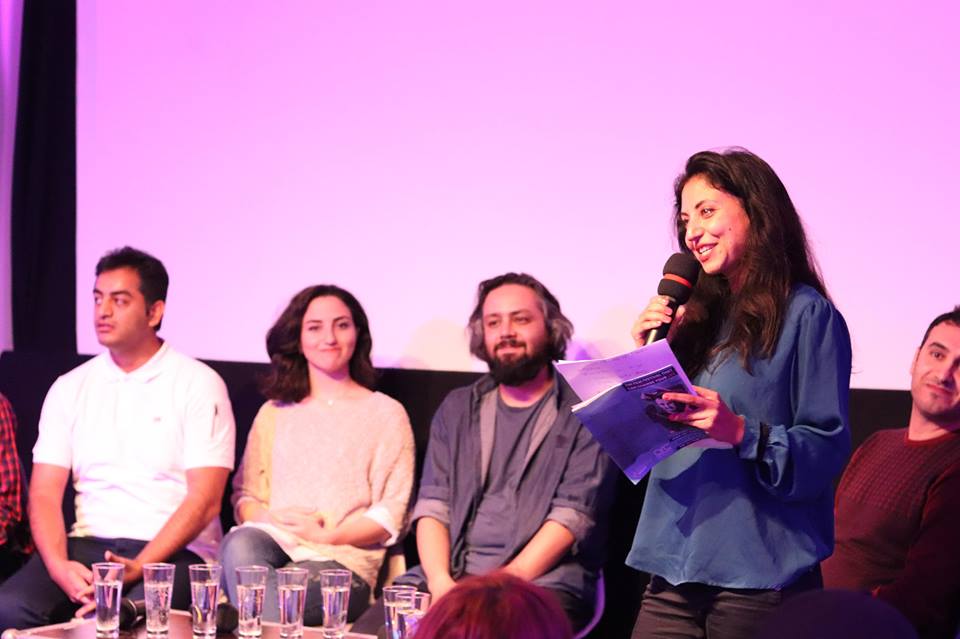 Among the film submissions were 84 films from Iran. The programmers appreciated the films strong narrative styles and diversity. Making Iran our partner country of 2019 we faced the challenge of inviting most of them. After a difficult process with the embassy we are very glad that six filmmakers from Tehran were able to join the Arc Film Festival in Mainz. We are also glad to welcome Yousef Panahi as honorary gust, brother and producer of Jaffas Panahi. Host: Julia Monte (actress) |  Interpreter: Seyed Morteza Zanjani | Photohraphy: Carsten Simon & Hao Ping-Wu

Tanin Torabi (Director, The Derivé): Tanin Torabi is a contemporary dance artist and curator based in Iran. She works in the realm of performance, choreography, and film, and enjoys exploring the connection between the three.

Reza Atefi (Regisseur, Movement): Reza Atefi presents a subtle work. In his film Movement he introduces us to the life of a simple man in a simple life in the land of Iran. While international media speak of threats and agreements interchangingly, he seizes the smallest movements of all.

Bahman Kormi (Cinematography): Bahman Kormi is a german cinematographer with roots in Iran. Partaking in the Board Of Jury 2019 he has not only seen all the films represented by our guests but also understands how to distinguish the undertaking and methods. 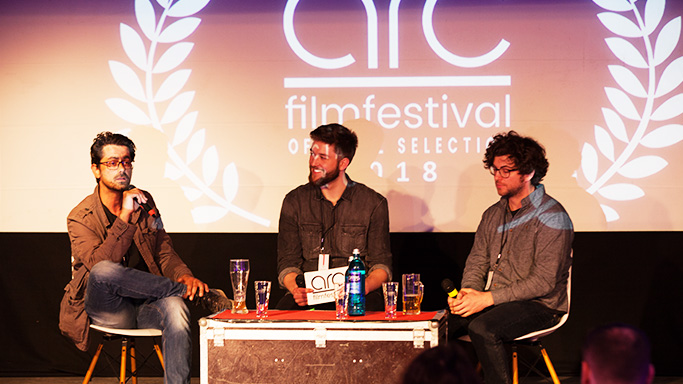 The new panaromatic experience provides new ways to tell stories, but also many challenges. We take a closer look at the work-flow emphasising the camera work. Thursday: Camera work in 360°, Friday afternoon: Audio in 360° and Saturday: Directing 360°)

In the edition 2018 we included four 360° films into the official selection and offer a workshop held by ZDF Digital who are giving a deep inside with Hands On for emerging talents in the new fields. On Saturday afternoon we proudly present a new edition of the Directors' Coffee giving directors to hand what they need to be thinking about when entering the new medium.

Harald Capota (camera, ZDF): Together with our partner ZDF Digital one of the most elaborate productions in the field of 360° film was created. Harry Capota is an experiences cinematographer who knows about the difficulties in the workflow with the new technology and gives us an insight into this massive production.

Markus Biersack (camera): One might consider the experimentation with moving images in 360 degrees to be at the forefront of the avantgarde. After working for two years on his documentary that he produced in four countries travelling with the new technology Markus Biersack shares his experience with us. 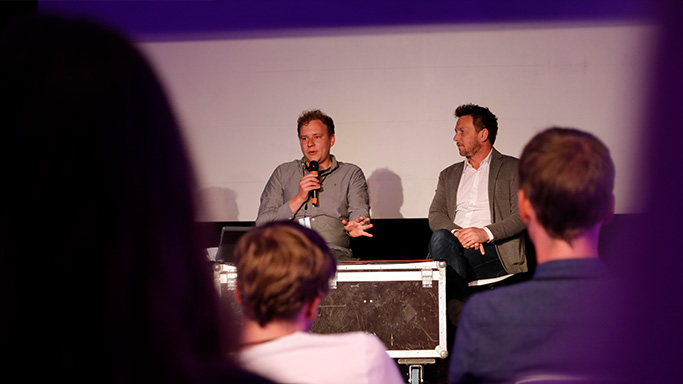 Rheinland-Pfalz still has no film funding body. The Mainz based TV channel ZDF buys danish screenwriters instead of developing local talent and German film does not fare well internationally. Not yet, anyway. We are grilling for the chances for the future! Where is the unused potential and what might the German film industry of the future look like? The Arc Film Festival itself is perhaps an answer to these questions. We look towards the UK for some hints about the future development.

Tidi von Tiedemann (producer & director, Kontrastfilm):  The producer from Mainz is a long standing campaigner for the development of a film funding body here in Rheinland-Pfalz. Tidi von Tiedermann is tireless in his engagement for the future of German film and being our patron of the year we are glad to include his view into this urging theme.

Clemens Maiunke (camera):  Clemens Majunke is a German cinematographer who has been living in Great Britain for several years. In this roundtable he is the link to our partnership with the United Kingdom and sensitises for the upcoming changes according to the Brexit. In this Scene Talk he is also the one to look at the German film industry from a distance. 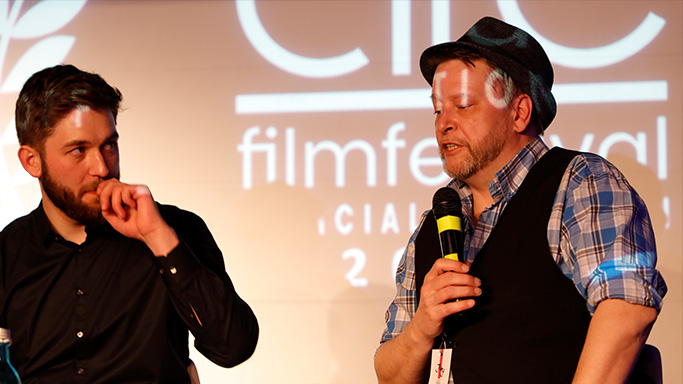 "History repeats itself" is an oft-repeated maxim. And looking carefully at the facts, some troubling old methods of manipulation are at play. To gain a better insight we talk to a filmmaker who deals with the media landscape of the Third Reich. Germany witnessed major changes to its identity during the 20th and 21st century. Those changes determined the periodisation of national cinema into a succession of distinct eras and movements. Now we are facing times where it becomes very relevant again to talk about the influence and responsibility that media has.

Tom Greiner (producer & director, Vierte Wand Filmproduktion):  Director Tom Greiner takes a critical look at history in his films, as exemplified in his current project "Love letters to Hitler" concerning the Nazi period. Carefully observing the media according to the new possibilities on the internet, he is very conscious and understands the practice. 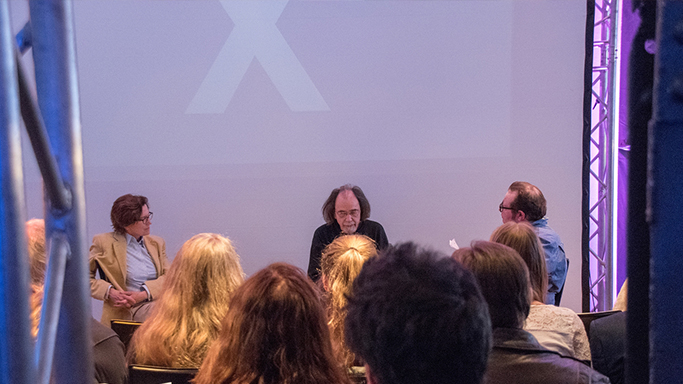 Film as art - back then, nowadays and in the future

As art is almost always internally in conflict, so it sparks discusssion on contentious issues. This year\'s partnership with the world\'s only monochrome film festival gives us food for thought on the theme \"black and white\". Inviting a head editor of Arte, the European TV channel that promotes cultural programming and a commissioner of the Oberhausen Kurzfilmtage, one of the oldest short film festivals that exist, we want to dig deeper.

Nina Goslar (chief editor, Arte): Arte editor Nina Goslar was responsible for the restauration of silent films such as The Cabinet of Dr. Caligari. Her insight into the workflows of Arte are not only opening up the audiences minds, but rather give input and inspiration for the rising talents among us.


Rheinhard W. Wolf (leader, Ciné Mayence): Reinhard Wolf is a long-standing member of the selection committee for the Oberhausener Kurzfilmtage, one of the oldest short film festivals in the world. Being the leader of the beloved Stadtkino Cine Mayence he is enriching the cultural programme of the city of Mainz. 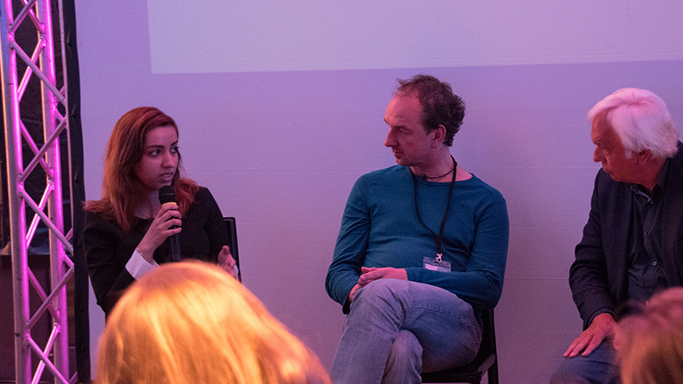 The media carry a great responsibility. The late Venice Film Festival juror Werner Schneider-Quindeau talks to upcoming filmmakers about current affairs and their relationship with the media. The panelists all presented their work in the previous section of the festival which put how the media deal with war in the spotlight. Chair: Werner Schneider-Quindeau (Pastor, St. Catherine's Church, Frankfurt) Photography: Eva Schmidt & Sebastian Matthias

Kimia Eyzad Panah (writer & director: Fighter): The young director from neighbouring Hesse had two of her films showcased at the first edition of the Arc Film Festival.